Pfizer announced on the 18th October 2007, that it will be returning the worldwide rights for Exubera insulin back to Nektar, the company from which the inhaled insulin technology was licensed. After the 16th of January, Pfizer will no longer promote or sell Exubera.

Since we first published our document on inhaled insulin in 2003, a lot has happened. Inhaled insulin has been studied in clinical trials involving over 3,000 adults and has been approved for use by the drug licencing authorities in Europe and America. Insulin Exubera is the first of these products to come to the market. 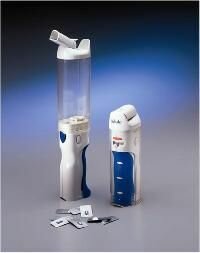 The difficulties surrounding the development and production of this inhaled insulin is illustrated by the fact Insulin Exubera was jointly developed by two large pharmaceutical companies, Pfizer inc. and Sanofi-Aventis. The inhaler device was developed by a third company Nektar Therapeutics. Pfizer has since purchased the full global rights to the drug and Exubera will therefore be marketed solely by Pfizer.

The insulin is inhaled as a dry powder which is absorbed via the lungs and thereby into the bloodstream.

Inhaled insulin does not at present substitute for long acting or basal insulin which may also be required for good control.

Is the effect sustained?

One of the many questions which researchers asked is ‘does inhaled insulin work long-term’ and ‘does it harm the lungs‘. Studies over a four year period have shown no deterioration in lung function as well as sustained efficacy. It must be understood that longer term safety data will only result from clinical use in patients.

The need to perform these studies explains why this product, which has been spoken of for many years, has taken so long to reach regulatory approval. Over three thousand patients have tried Exubera insulin in these clinical trials.

Is inhaled insulin only for Type 1 diabetes?

No. It has been approved for use by those with Type 1 or Type 2 diabetes who require short acting insulin.

What doses will be available?

Exubera is supplied in unit dose blisters containing 1 mg and 3 mg of human insulin. The recommended starting dose is based on this formula:

The total daily dose is then divided into three pre-meal doses.

1 mg of Exubera is equivalent to 3 IU of human insulin injected subcutaneously (sc).

3 mg of Exubera is equivalent to 8 IU of human insulin sc.

The dosing is complex and 3 of the 1mg blisters does not equate to a 3 mg dose.

What time is it administered?

The dose should be inhaled within 10 minutes before the start of a meal.

Who would benefit from inhaled insulin?

The target groups for inhaled insulin have not yet been clearly defined. However people who require assistance for injections, those who are ‘needle phobic’ and people who travel a lot may benefit.

Are there any side effects?

During clinical studies it was observed that people treated with Exubera may have a mild to moderate cough which often disappeared with continued use. Small differences in lung function which occurred without symptoms, were also noted, though these changes were not progressive. Hypoglycaemia has been described and is more frequent in smokers in whom the use of this medication is contraindicated.

Who should not take this preparation?

Patients must not smoke during Exubera therapy and must have stopped smoking six months prior to initiating treatment. There is an increased risk of hypoglycaemia in smokers.

Can it be prescribed on the NHS?

Inhaled insulin has been evaluated by NICE - the National Institute for Clinical Excellence. Their guidance states

Despite changes to diet, medicines (known as ‘oral hypoglycaemic agents') to control blood sugar, and insulin injections blood sugar targets are not acheived

The person is unable to inject insulin before meals, or is unable increase their current level of insulin injections, either because they have a very strong and lasting fear of injections that has been confirmed as a phobia by a specialist in diabetes or mental health or because they have severe and persistent problems with injection sites.’

Who will provide the training for using the inhaler?

As this is the first time this device will be used by healthcare professionals we anticipate that the manufacturing company Pfizer Ltd will provide education and support for use of the inhaler.

How much does it cost?

The annual cost of Exubera is in the region of one thousand pounds per patient. This will clearly vary with the dose prescribed.

When will Insulin Exubera be available in the UK?

Exubera is currently available in the UK.

TOPICS IN THIS SECTION